Making Narratives with a Little Neuroscience 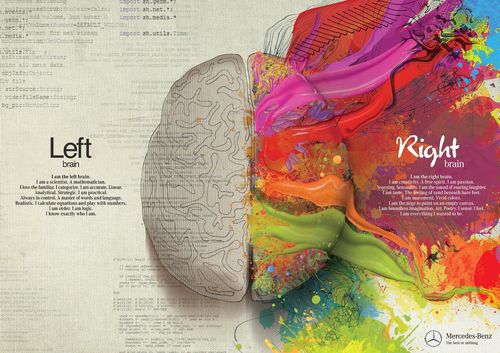 I EMERGED FROM A storytelling session with three colleagues and remembered an item about storytelling by John Bickle and Sean Keating in The New Scientist. The article will influence how I plan to teach a module on "narrative" next year.

If you live with a clickstream like I do, you are building a narratives of your own existence. Your narrative is formed by the stories that can be told about yourself by the check-ins you share, the images you post, the tweets you send. In the real world, your narrative encompasses the intimate discussions you have with loved ones.

We express some or our personal narrative in speech. I hear remarkable vocal expressions from our four-year-old. We keep some of our narrative to ourselves, reverberating in a little inner voice. And by weaving together the full collection of one's internal and external narratives we generate our personal self. That personal self evolves as we grow.

What we discussed over coffee today concerned state-of-the-art neuro-imaging and cognitive neuropsychology both upholding the idea that we create our "selves" through narrative. This is based upon research which indicates both hemispheres of your brain are involved in the stories you tell.

The research stretches back more than 50 years with analysis of "split-brain" patients. Neuroscientist Michael Gazzaniga argued that the human brain's left hemisphere is specialised for intelligent behaviour and hypothesis formation. It also possesses the unique capacity to interpret - that is, narrate - behaviours and emotional states initiated by either hemisphere.

I follow the fascinating recovery periods of head injuries and know the left hemisphere of our brain is the language hemisphere. It has specialised cortical regions for producing, interpreting and understanding speech. It is also the hemisphere that produces narratives.

In his research, Gazzaniga explains "interpreter" in the left hemisphere creates the unified feeling of an autobiographical, personal, unique self.

"The interpreter sustains a running narrative of our actions, emotions, thoughts, and dreams. The interpreter is the glue that keeps our story unified, and creates our sense of being a coherent, rational agent. To our bag of individual instincts it brings theories about our lives. These narratives of our past behaviour seep into our awareness and give us an autobiography," he writes.

We have powerful language areas in our left hemispheres. They draw on information in memory (amygdalo-hippocampal circuits, dorsolateral prefrontal cortices) and planning regions (orbitofrontal cortices). As neurologist Jeffrey Saver has shown, damage to these regions disrupts narration in a variety of ways, ranging from unbounded narration, in which a person generates narratives unconstrained by reality, to denarration, the inability to generate any narratives, external or internal. Medical science shows what may be absent from a person unable to construct a story.

Research from 10 years ago showed how Gazzaniga's interpreter produced a narrative self? In 2003, Bickle suggested that our "little inner voice" is the key to crafting a narrative about ourselves. The inner voice may be produced by ongoing activity in language regions of the left hemisphere, both when the products of that activity are broadcast via external speech and when they are silently expressed through inner speech.

It's fascinating for me to see samples of the brain at work through the demonstration of PET imaging. You can see on screen what the brain does during periods of inner speech. The PET images show activity in the classic speech production area known as Broca's area. The imagery also shows activity in Wernicke's area, the brain region for language comprehension, suggesting that not only do the brain's speech areas produce silent inner speech, but that our inner voice is understood and interpreted by the comprehension areas. The result of all this activity is the narrative self.

During the past decade, our understanding of "narrative" has increased with the release and analysis of more neuro-imaging data. Sukhwinder Shergill, a psychiatrist at King's College London, investigated the neural bases of schizophrenia symptoms, including auditory hallucinations. By generating and monitoring inner speech in ingenious ways, his functional MRI studies consistently showed activity in neural areas involved in speech production, comprehension and internal monitoring during silent inner speech. This fits nicely with Gazzaniga's idea about the left hemisphere interpreter's role in creating the autobiographical self.

We teach the creation of narratives through traditional models like the Hero's Journey. In these frameworks, protagonists and antagonists interact with a prescribed relationship between narrators, characters and listeners. They work within linear plots with a fixed past. A horizon of possibilities project coherently into the future. This is in a traditional narrative.

But in our creative multimedia curriculum, digital technologies can create narratives that stray from classic structure. Inception can be induced. A Delorean can fly us back to ourselves. Virtual worlds, massively multiplayer online role-playing games (MMORPGs), and LAYAR effects loosen and shift traditional narrative structure. And in the best of these alternative digital narratives, various people collaborate and co-create with unique plot lines and inventive media.

This is the kind of narrative structure I will teach to incoming animators in the Limerick Institute of Technology. It's a realm open to limitless narratives crafted without the defining features of the traditional structures. It's a narrative with selves based upon digital narratives. These "selves" run the risk of being alien to their creators. And it's in that construction that I believe some truly unique story-telling will emerge.

Making Narratives with a Little Neuroscience

I EMERGED FROM A storytelling session with three colleagues and remembered an item about storytelling by John Bickle and Sean Keating in The New Scientist. The article will influence how I plan to teach a module on "narrative" next year.