Inside View: Learned After Teaching Twitter for Seven Years 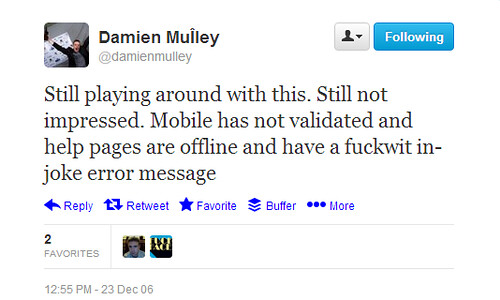 Thanks to information flowing from Twitter and Facebook accounts, the River of News no longer flows from RSS but from the stream of information percolating through social media accounts. But as I've discovered, this "river" has better value when it is part of a culled flow of information. I cull by list, by hashtag and by saved search. When I sit and watch Facebook, Tumblr or Twitter newsfeeds click  by, I'm aware of the addictive nature of always-on information flows. I know plenty of people who watch their newsfeeds as part of a second or third screen operating environment. That's not my style.

I have colleagues who feel compelled to tell me not to blog or tweet about things in specific settings. In their minds, I'm always connected to some active electronic social networking infrastructure, making me some kind of intelligent agent who might inadvertently leak a trade secret. They politely ask me to mute myself. And I know I'm not a rabid user of social media, especially during the work day.

I believe that if I tweet or hit Facebook during the work day, I need to have a method of extracting payment for the time spent on the social networking systems. I use SproutSocial and Google Universal Analytics and get a framework of precise measurement. I try to measure what matters--that means I set out my stall with a metric meaningful enough to move the needle. Part of this analysis tells me when and in which context I should interact on Twitter, Facebook and LinkedIn. More importantly, thoughts about "measuring it" often suggest things I should finish and share or some event I should attend with an active presentation. In both of those cases, I can get mentioned, retweeted and favourited for better impact than simply churning out Twitter conversations. That's what the numbers show in SproutSocial or Google Analytics.

As a constructivist, I believe in the importance of learning to learn. As a proponent of #edchatie, I think it's important to support Personal Learning Networks that serve teachers. Twitter, Scoop.it, Flickr, and Tumblr offer value in this space. Part of our social media module asks students to reflect on how they have developed or augmented their own PLNs through social networking.

It's impossible to follow all these disparate spaces while offering meaningful engagement in all of them. For that reason, I use notifications to alert me to where conversation and interactions actively happen. Most of the notifications push all the way to the home screens of Android, iOS, and Windows Phone. I set those notifications up, test their timeliness and then rely upon them to focus my attention at right place and at the right time.

I doubt that Twitter's early engineers would have imagined how social networking space would evolve in less than 10 years. And they probably never thought their handiwork would end up in the middle of a creative multimedia degree programme for the past seven years.

[Bernie Goldbach is the senior creative multimedia lecturer in the Limerick School of Art & Design. He joined Twitter in early December 2006 and still has three active accounts .]