Inside View: Digital Literacy and CPD 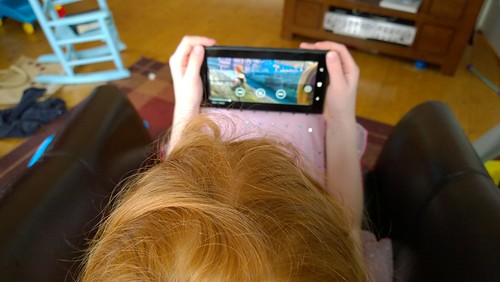 I think the idea of digital literacy has to affect three separate kinds of screens in every teacher's life.  First, a teacher needs to be able to interact with a digital touchpoint one foot away by managing the notifications and by curating the information flow they can hold in their hands. If you cannot work a smartphone via a data connection, you lack digital literacy.

Second, a truly literate teacher needs to be able to interact with a digital screen three feet away on a laptop, desktop or tablet. Teachers need to effortlessly show collaborative resources they use to prepare or improve classroom presentations. I expect as much from those teaching the touchscreen-savvy senior infant in our home.

Third, teachers need to focus on the screens they have ten feet away and comment on the relationship that exists between our digital culture and content playing on those screens placed across the room. Things like television broadcasts, streamed content and DVDs provide cultural content for us. Yet some teachers I know try to ignore hashtags and at-signs they see on the bottom thirds of television broadcasts. Ignoring the role of Twitter as a news source disrespects our digital culture.

A few years ago on my blog, I linked to The DailyRiff when Donna Murdoch wrote about an upcoming digital divide among educators. She cited the essential requirement to "keep up on a constant basis, usually through our Personal Learning Networks" and suggests "Twitter, Google Plus, Classroom 2.0, and various other communities" because they are "a wealth of information for self-directed educators". In addition to our annual #ictedu event, there's also #edchatie and CESI in Ireland.

Digital literacy and the need for lifelong learning percolates through several modules taught in the Creative Multimedia Honours Degree in theLimerick Institute of Technology (LIT). When we first created the degree in 2005, accreditation teams were happy with seeing computer literacy and visual literacy on the curriculum. By 2007, we included social media literacy in the mix and 15 students on our Clonmel campus were among the first 100 people to use Twitter in Ireland. Our 2012 revision of the Creative Multimedia Honours degree encompasses a sociocultural orientation that focuses on literacy as a social practice. The semesterised programme delivered in 2014 emphasizes the role of literacy with a range of socially patterned and goal-directed ways of getting things done in the world.

We can no longer decree that merely being able to read and write makes someone literate. In fact, an extremely well-read person from the early 20th century would be "illiterate" in the 21st century. If your only touchpoint for communications involves a box connnected to a handset with coiled wires, you are part of the population that the European Community wants to help with training and subsidies.

The problem in Ireland's case is this definition of "new literacy" has not become an imperative. Those in government believes broadband is ubiquitous--it is not. Ministers assume they can tax every home because everyone can leverage the internet in the cloud all around them. This isn't true, yet the Irish government assumes all homes can connect to a vast library of information and use a host of streaming high definition services. Everyone in Ireland pays a tax for high speed data they should try to bring into onto their screens.

In LIT's classrooms, freelance journalists have taken courses in which they can build upon news reporting skills and translate those time-tested skills into publishing on the internet and delivering content through ePubs. Visual artists arrive with portfolios to start their creative multimedia work and they evolve their skills to create clever animations on mobile phone, laptop, television and desktop screens. Visually impaired students learn to hear the multimedia world around them and to capture and share their own interactions with that real environment.

Beyond the simple process of teaching a student how to present digitally lies the need to prepare students for work flows and jobs that are currently being offered as Ireland emerges from recession. When I joined colleagues to write the current BSc in Creative Multimedia in 2009, we did not pretend to know the exact job titles of jobs in the year 2015. However, we did know that digital literacy and cross-domain skills deliver results that place our graduates on the first rung of the job ladder.

Some people consider these skills in digital creativity to be the true essence of a creative digital citizen. Others call it "thinking out of the box". We earnestly believe that it makes no sense to train someone to highly professional levels inside a software suite. Doing that sets up graduates for immediate retraining when starting paid employment. Instead, it makes more sense to teach students how to stay relevant. That means knowing how to find things, how to learn to learn, and how to accomplish collaborative goals through a self-directed process.

Much of the third level learning process we use on the LSAD-Clonmel campus embraces digital technology that was not in place five years ago. Some of these processes are on the touchscreens of a BYOD environment that requires wide and open access to the internet, using data communications protocols and site access that are blocked at the proxy level. Where I work, it's a "Stop Blocking" game that involves asking for certain restrictions to be lifted so students can interact with a bigger expanse of digital space than ever before. That larger electronic work space feels like the real world, as it should.

We are quickly approaching the end of another academic semester. Part of our annual wrap-up involves an exhibition. Another part involves talking to graduates who are doing clever work with digital tools. We know that our graduates will have the fundamental skills that enable them to enjoy gainful employment alongside global companies in a connected work space. I believe the graduates we congratulate this year have finished their Honours Degrees with a stronger claim of being "educated" than those who came before. And that's what the Knowledge Society expects.

Image from Bernie's sitting room where creative multimedia already features through screens one foot away.

Posted at 06:43 AM in Best Practise | Permalink