Inside View: Newsround Because You Asked 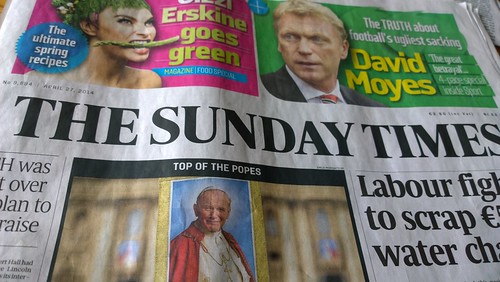 The major reason I'm not making the audio and video clips is domestic chores. It's impossible to entertain a two year old boy while reading, annotating and recording commentary. And all my markers along with cello tape and scissors have disappeared into one of the art collections accumulated by the six year old.

I open my clip talking about fresh vegetables [3], something I've learned to respect from Peter Donegan on his Sodshow and Catriona Redmond on her blog.

The top right hand corner of the Sunday Times is dedicated to David Moyes and the four page inside story of how he was turfed out of his managerial position at Manchester United. The coverage of this saga is first class. [4]

Justine McCarthy offers thoughtful opinion about how imposed austerity has pummeled the lower class in Ireland. "The powerfully rich still believe their lives are more important than others'". [5]

The best perspective on reforms expressed by the Irish Minister for Education appears in a full page Focus item in the Sunday Times. The part affecting me concerns the Teachers Union of Ireland's stance on pay and conditions if and when Ireland moves into a 12-month duty cycle for further education or higher education. [6]

I admire the work of Gavin Sheridan, the first Irish blogger I routinely contacted for story ideas and shared links. We were among the first 30 bloggers in Ireland back in 2002 and since that time, Gavin has perfected the art of deep research. He routinely uncovers matters of national interest because he knows how to create and follow up with Freedom of Information item requests. [7] A Sunday Times item explains how he and Mark Coughlan kicked a hornet's nest around Ireland's major training agency. He won and that's a wonderful result for democracy and transparency.

Like three of the 10,000 people who follow me on Google Plus, I'm reading Thomas Piketty's Capital in the Twenty-First Century. The 685-page tome will be the biggest seller in Harvard University Press history. [8]

Some very troubling details have emerged about the South Korean ferry that sank and killed 300 of the 476 people on board. [9] Port authorities seemed to have allowed the vessel "to sail with more than three times its cargo limit" and that could have contributed to its rapid capsizing.

Niall Harbison, the chef turned entrepreneur, gets a warm profile. [10] He proudly points to his home in Ranelagh with its "great buzz" coming from "lots of cafes and restaurants". To which I'd add it's the stomping ground of hundreds of energetic students and artists.

Official Irish unemployment stands at 253,000 at the moment but if you factor in all the people who have been mandated to attend training programmes, the number rises to more than 330,000. This means the actual unemployment percentage in Ireland is around 32% when  you count all the job seekers, underemployed, those actively discouraged from finding work by employment counselours and the net emigration of working people. This is a damning statistic because the longer you stay unemployed, the more likely you will never find paid employment.

Gurdgiev would scrap JobBridge, eliminate Community Employment schemes and redirect resources towards a modern apprentice programme similar to what exists in Germany. That kind of approach lies beyond the grasp of the average Cabinet member.

So there you have it--the Sunday News in Ireland reduced to 800 words and 10 minutes. Let me know if you want more of this kind of transmedia. Simply tweet me @topgold if you want to add your vote.

11. Constantin Gurdgiev -- "State strategy at risk of locking out the jobless" in the Business section, April 27, 2014.