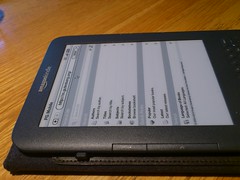 I Listen Most Intently through Earbuds 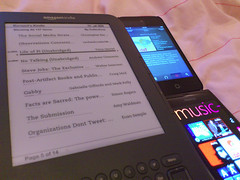 ONE SIDE EFFECT of owning a Kindle is having to upgrade earbuds because the Kindle is really good at storing MP3 and buying Audible books.

I spread my audio experience across several platforms, mainly to avoid a flat battery on any one device. Although my preferred listening experience is through Pocket Casts on the iPod Touch, Zune's Music Player on my Nokia Lumia is also a brilliant option. However, the production values achieved on the Kindle through Audible.com books is superb.  So it's Pocket Casts (iOS ans Android), Zune subscriptions (Windows Phone) and Audible on Kindle. After less than a year with the Kindle, I've run out of space on the device. That's mainly because I'm carrying too many PDFs in the Kindle. I've decided to sort out that issue, keeping PDFs in Evernote on both the Lumia and the iPod Touch.

Continue reading "I Listen Most Intently through Earbuds" » 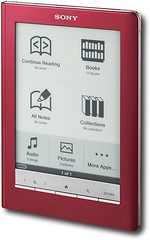 AS A LOYAL KINDLE owner, I've discovered I want access to my notes on screen. That's something Sony's eReader does nicely so I've marked my eBay Wishlist accordingly.

The Kindle's wifi access works well where I live and work so I expect the Sony's on-board wifi to be the same. That means it will probably encounter wifi problems when trying to connect to the internet in many Irish wifi hotspots (places requiring a browser log-in) and it probably won't work well with the wifi on public transportation. But when it connect, it will give me access to more than two million titles in Sony's Reader Store.

I am planning to convert a lot of Mia's primary school books onto e-ink. When they go to the Sony PRS-T1, they will be in the lightest eReader on the market. The PRS-T1 weighs less than six ounces. That's lighter than a paperback. Plus its slim curved profile makes it easy to hold. 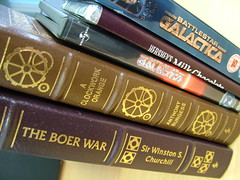 WHILE LIVING IN GERMANY, I used to read Johann Wolfgang von Goethe in the language of my forebears and it was comforting.

While living in Kilkenny, I often found German emanating from the local paper in pieces written by Josephine Gräfin Plettenberg. Today, I return to Goethe, in words written inside the cover of my 2012 Moleskine.

Then indecision brings its own delays, and days are lost lamenting over lost days.

Are you in earnest? Seize this very minute.

Boldness has genius, power and magic in it.

Thanks to my endearing relationship with my Kindle, I've rekindled my love for voracious reading and without asking Pinterest about books. I want to have the mental discipline to think about advice sitting inside the memory of my Kindle when I get wound up by little things at work. That mental discipline extends from reading earnestly, not reading only professional tomes.  So I'm back with my long read. I dive into biographies. I've discovered free adventure titles in e-book form. I've started to enjoy an intensive journey into myself, following characters on electronic pages I can keep tucked away on my Kindle.

My photo of books on my shelf and a candy bar from home. The Google query "Are you in earnest" returns 82.5m results, 90 from my personal network and one in my Evernote stash.

SINCE OUR FOUR-YEAR OLD has better tap-and-move coordination skills than her parents, we're letting her put together her first epub by using Book Creator on the iPad. If she doesn't get bored with the process, we'll keep using the app.

The problem I'm facing lies in media rights management. Our four-year-old lives inside a world she has created with friends named Lola, Charlie, Homer, Bart, Lisa, Maggie, Ben, Holly, Barney, Peppa, and Dora. Creating a digital album of Mia's world by using the faces of her digital friends will walk us right into a copyright crossfire and probably would result in Mia's iBook being tossed out of the public iBookstore. We're happy enough to have a title sitting in our own bookshelf and in trying to share Mia's Book with cousins across the pond. In the meantime, Book Creator on the iPad has shown me that it's possible to incorporate Apple's iBook format on our third level epublishing curriculum without buying a suite of Macs. 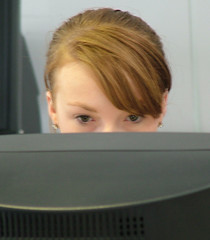 I HAVE WADED INTO the waters of e-publishing and believe I will have a result within 10 days of laying down my first cursor on text.

The focus of my work involves taking products that are in one format and giving them a more compelling look for Kindle. Alongside a small group of clever students in LIT-Clonmel, I'm using Adobe InDesign, Calibre, Acrobat Pro and several web services. The most important deliverable I've set in the audio clip below concerns the business intelligence of e-publishing. I want students to tell me the business value of the processes we will master during the next three months. It doesn't make sense to learn a skillset that has no appreciable value for management. Through a series of set pieces, I want these talented students to produce business and commercial value through e-ink. I've eight main areas that I believe merit practical academic exploration. 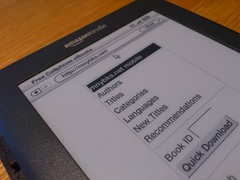 ALONG WITH A TEAM of third level students from the Limerick Institute of Technology, I listened to editor Eoin Purcell describe how electronic publishing is disrupting the print industry. I brought my Kindle to the table and listened.

Just before Christmas, I learned how Random House, the USA's largest publisher, was getting 20% of its U.S. revenue from digital sales. Every week Amazon tells me about another author who reached the million mark in Kindle e-book sales. In the middle of January, six of the top 20 titles on USA Today's Best-Selling Books list were e-books. Barnes and Noble looks to its Nook to strengthen the weakening bottom line of its traditional outlets. This is a watershed year for e-books and we're teaching students how to create for this emergent market.

Tina Jordan of the Association of American Publishers says that a best-selling title from a branded author can run upwards of 30% to 40% in digital sales. That's interesting for me as I look around and encounter students who want to have many choices in reading formats and ease of buying. Anecdotally, I see a migration by students away from hard covers and into e-books whose pages they can print on demand. At home, I watch my four-year-old daughter read from memory the iPad stories that can read to her when the audio is turned on.

I AM PLAYING WITH LaTeX, an e-publishing tool that looks like it could fulfill many ebook publishing needs I've encountered. The handy thing is that you can then convert a LaTeX book into HTML.

The Irish LaTeX community is vibrant. I've discovered people willing to share specialised macros as well as packages developed in the Share-and-Share-Alike spirit. But beyond the packages, I want to find someone who is developing an HTML5 front end editor so I can use LaTeX as a backend. An attractive HTML5-based ebook creation tool would hold its own against iBook Creator.