I AM A BIG FAN of version-checked document handling and that's why I often prefer edits done inside Adobe's PDF ecosystem and with Microsoft Sharepoint docs.

The screenshot shows the dashboard we're using in a creative multimedia module as we learn how to squeeze business intelligence from email traffic. The toolset includes Adobe SendNow, Newsweaver and ReadNotify. 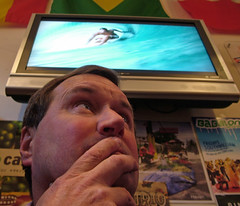 PEOPLE HAVE STARTED arriving on my blog after looking up "Ireland in 2012" so I'm going to revise a four-year-old post I wrote about that.

I get most of my ideas about what lies ahead by asking creative multimedia students at LIT-Clonmel what they think lies ahead of them in the workplace. Ireland of 2012 is much different than most of them imagined when they started their first year of college in 2007. I believe the Irish workplace has shifted dramatically to where employers know more about their incoming staff than ever before. That's because frictionless social networking has made it impossible to keep things secret.

The workplace of 2012 is a frictionless environment--unless you turn off notification and communications systems, colleagues know if you're at work by the presence of green dots or by the inputs you make in shared spaces. You can be working in a satellite office and it's often the same as working down the hall from someone.

Ireland in 2012 has become a Facebook Nation full of blathering tweeple. The hipsters use photo-sharing services like Instagram and Picplz. Around a third of them check into places with Foursquare, Google, or Facebook. And many of these check-ins percolate across different social networks for the world to see.

Information about people are leaking across networks by design. If you have a special application for residency in the Republic, it's part of a package the immigration officers see in Heathrow. If you have late payments for car insurance or motor tax, the garda traffic corps vehicle approaching from the opposite direction knows because of number recognition technology in the car. If you travel on Irish motorways, a database has recorded your movements for analysis. Without much notice, Irish society has acquired a layer of  data forensics.

When American delegations visited Ireland several times in 2011, I heard from a few of my twice-retired CI mates who now have building passes to the Old Executive Office Building in Washington, D.C. They have a vision of the future where transparency has evolved into a magnifying glass. This means that in the year 2012, anyone with rudimentary skills can discern your first degree of separation, the geodetic reference for your home, the financing remaining on your car, and the last time your pet was immunised. This is 2012. We have made it that way.

Image shot in in Havana, a free and open wifi zone in a friendly centre location of Dublin, Ireland. I used a three-year old Fujifilm S7000 camera while thinking of Euan and tapas. 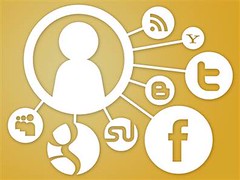 AFTER LISTENING TO Jeff Jarvis for more than 40 hours, I'm sold on both the necessity to let some of my online life remain public. But I'm also a little concerned about persistent electronic data.

I've had a few experiences where some companies know about me before I declare any credentials online. Google seems to correlate my home router with advertisements that fit nicely with my wife's browsing habits. On several occasions, her iPad has displayed ads that would have been tailored to the home broadband router's identity, not to any Javascript cookie on her viewing device. LinkedIn addresses me via my Flickr e-mail identity, not through my LinkedIn account e-mail. It gets this information from a persistent cookie served by Yahoo!

Two years ago, Samy Kamkar described how the Evercookie Javascript API produces extremely persistent cookies in a browser. Its goal is to identify a client even after they've removed standard cookies, Flash cookies (Local Shared Objects or LSOs), and others. As we move towards HTML 5 on laptops and mobile phones, we're moving closer to a world where we're all displaying those public parts that Jeff Jarvis cites in his book. If you're a creature of habit and your browsing patterns follow a set routine, I don't think there's much you can do about keeping yourself totally cloaked. 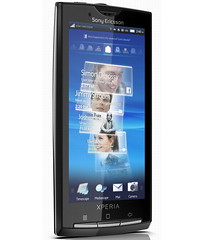 This might have happened to you too, if you’re a Facebook user with one of Facebook’s mobile applications installed on your smartphone. I discovered that nearly every contact that I had on my phone was also stored on Facebook’s servers. This means Facebook has the private phone number of several Secret Service agents now because they were on my phone. None of those guys has a Facebook account but Facebook now has their names and phone numbers. This happened because I probably approved the use of a term or a condition when I set up Facebook sync. I should know better. I followed the following steps to remove my phone's contacts from Facebook. 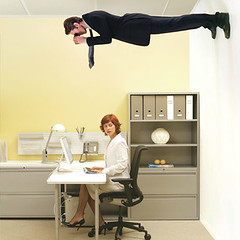 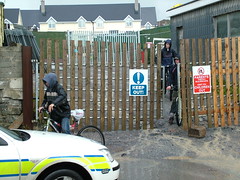 WITH A FEW VISITORS in the house for the Christmas season, I have to remember to log out of Facebook on my laptop, phones and iPad. This is important because one of my "friends" modified my profile picture when he discovered Facebook was live and accepting updates as he borrowed my laptop. Another "friend" created a status that only a small group of other people could see. The status message divulged something about a piece of lingerie belonging to a woman who was very concerned about a private party in someone else's flat. When she logged on, she could see a post in her newsfeed with embarrassing details and it created a lot of trauma. If you're feeling devious this holiday season and you discover an open log-in, you could also drive someone crazy with a Facebook post too. Just remember that before you post the message, click the lock icon next to "Share" and select "Custom Edit". Then set the post so it becomes visible only to "Friends of friends". And to wind up the unsuspecting victim, find the field called "These people" and pick the friend with whom you wish to share special joy. But don't expect much joy in return. 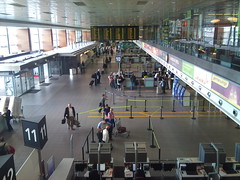 IT'S EASY TO FIND discussion online about the legality of public photography and I knew I was being observed by at least two cameras when I snapped a shot above Dublin Airport's departure area (at left). The CCTV cameras that watched me were technocratic examples of the voyeurism that George Orwell and Michel Foucault described in the 20th century. CCTV has become much more pervasive since those two authors described a Panopticon. Photographer Erin Quinn's new show brings the surveillance society into sharp focus during a week-long show in Dublin. Her photographs drill home the manner in which we are watched, recorded and archived. She shot most of her subjects while perched above the crowd in the Dublin Airport, similar to the position I used for several images in my Flickr photostream. Her exhibition is worth visiting, especially for people who have never considered themselves through the iris of a closed circuit security camera.

Surveillance is at the Centre for Creative Practises, 15 Pembroke Street Lower, Dublin 2, Ireland through 19 August 2010.