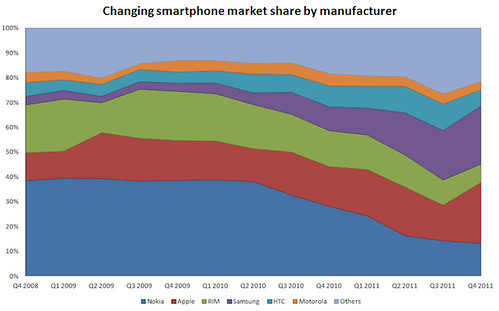 I HAVE BOUGHT more Nokia handsets than any other manufacturer's and Nokia remains the world’s largest seller of mobile phones by volume. It's declining in terms of market leadership and revenues.

MY FIRST TEST of BloghuB failed. This is a follow-on simple text post.

I sent a paragraph from my Nokia Lumia 800 to the Typepad servers earlier while scooting along the M7 in CountyLaois. That upload included an image with some HTML code that I edited. This post is just simple text--but I think I'll modify the post later with something other than the Bloghub logo since I can't do its fav ico justice. 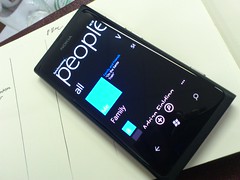 ALTHOUGH IT'S TAKEN me several years to accept the presence of earbuds on pedestrians, I'm often budded to my mobile phone while walking. Now I've discovered I can walk and text without tapping a screen.

Inside the Nokia Lumia 800 is a very clever voice recognition capability. I've used it to respond to text messages while walking around Dublin. I had to tap the screen to activate the "reply" function of the SMS message and then tap the little microphone icon but beyond that, it was simple to walk, talk and text simultaneously. My American accent has resulted in only a few mistakes. When I say "Ruth" (my wife's name) the phone wants to insert the abbreviation "re:" and that just means some of the texts I send home have become more formal when I start them with my wife's name.

I use the micbud when talking to text and that seems to be better than using the phone's on-board mic for voice recognition. That's probably because the micbud cancels out traffic noise and optimises its use for the human voice.

I didn't expect to find this little voice recognition feature on the Nokia Lumia. It's one of those lilttle things that makes the new handset more personable.

How the Lumia Has Changed My Habit Patterns 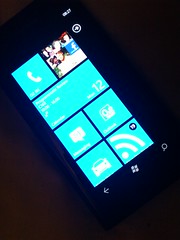 THE BIGGEST SIDE EFFECT of using a Nokia Lumia 800 in my daily life has been better e-mail management. This is no mean feat.

I have never enjoyed an In-Box Zero State. That's mainly because I maintain four separate e-mail identities. There are valid reasons for keeping separate (and cloaked) accounts while maintaining distinct online identities. But as a result of having to juggle multiple mail servers, I have previously needed to run some of my e-mail existence from a laptop. Not so with the Lumia 800. I am very impressed at how quickly and elegantly the phone is able to listen to my mail queues and to provide me easily viewable and instantly actionable message traffic. Because my e-mail burden is decreasing, I've had the opportunity to download and use a few applications from the Windows Marketplace.

Continue reading "How the Lumia Has Changed My Habit Patterns" »

Snagged by an Identity Issue 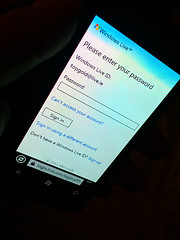 UPDATE 22 December 2011: My Live Account maps to my Irish identity credentials after Nokia reflashed my Lumia handset to the Republic of Ireland. It had UK credentials on it when I originally wrote this blog post.

LIKE DOZENS OF PEOPLE inside the Windows Marketplace, I'm having problems connecting my credit card to my Windows Live account.

This kind of problem will upset four developers who sell applications inside the Windows Phone Marketplace because I would have spent an average of $1.20 with each of them during the past two days. However, I'm unable to change the country where I maintain my main credit card and I no longer have a credit card in the country where Microsoft previously knew I bought online. The problem is made more complex by the fact that I have four different e-mail addresses for two different Windows Live accounts. My Xbox credentials are listed at an address on another continent and my Zune user name is different than all the other user names. This kind of thing happens based on the non-availability of the same user name across the entire Windows Phone platform.

In my case, even though the Zune network knows me and has my Irish credit card on file, my Lumia 800 handset will not accept the Zune server's credentials.

The Apple Moment with My Lumia 800 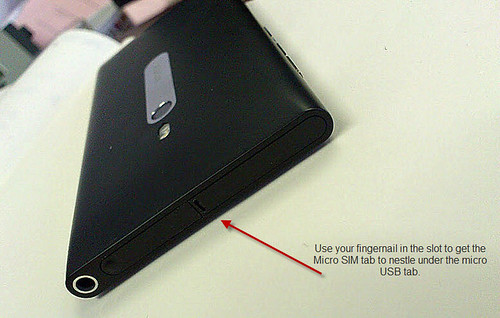 I HAD AN APPLE MOMENT when manhandling my Nokia Lumia 800 straight out of the box. I couldn't figure out how to close the little doors on top of the phone.

My office full of Apple purists scoffed at the unclean lines of the phone because I was too blind to see the fingernail slot in the plastic where I needed to apply a little sliding force to close one flapper door under another. Using my glasses helped me figure out what to do. But I don't think there are instructions with the handset to help blind bats to see what to do. So I'm putting up this helpful little shot so new Lumia owners can benefit from my poor vision.

Snapped by my Sony Xperia Arc just before I loaded the phone with my Facebook contacts. I'm surprised I loaded Facebook before I set up any email account but that's what happened. Then I configured my Exchange, Gmail, Well and Yahoo accounts.

I HAVE WATCHED the Nokia Digital Pen write 56 A5 pages and successfully transfer 42 of them through its cradle to my laptop.

Problems with data transfer trace back to failing to press either the start square or the send square at the bottoms of the Esselte pages. My problems were further compounded by using the pen to record dozens of samples of student work--six of 52 pages went missing because the pen didn't know it should record tracings made in the A5 copy book.

I HAVE USED MY Nokia Pen to sketch a dozen different schematics and I intend to use some of them as part of process diagrams with students.

The pen picks up more when it's used slowly and deliberately. I can vary line thickness by carefully tracing over original lines. That's faster than selecting a larger line thickness in the back of the A5 copy book that comes with the pen. I plan to put several things online once I have a small portfolio of work. That should happen rather quickly since using the pen is quite easy