How Remoting Changed My Workflow #WFH 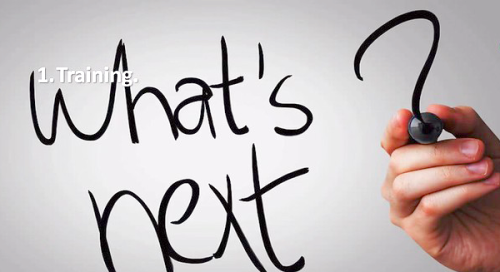 SIXTY DAYS INTO working from home, I've changed some routines and become more aware of collaborative calendaring. I also know I need to upskill.

Bosch Dishwasher Does Not Fill

WE BOUGHT A Bosch dishwasher because nobody I knew had a Bosch that failed before it turned 20. But ours refused to fill with water and that created a problem.

I followed the instructions in the manual to no avail. Then something good happened and I talked about it in my kitchen, saving the audio clip below.

I FOLLOW PEOPLE who measure their effectivness by the number of tabs they keep open in their browsers. How many tabs do you have open right now?

If you’re web warrior, you probably have more than 20 tabs open. You're probably annoyed by being unable to zero in and access the tab you need to finish a tabbed job. You may be resigned to pointing and clicking your way through your tab-driven pattern of work. If you're using Google Chrome on Windows, you may like a #chrometip that helps you quickly switch between your open tabs: 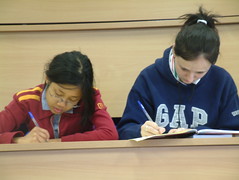 I HAVE 52 first year final exam papers that beg to be corrected before Monday so their results can be registered into an electronic system and my mind can enjoy the holiday season. However, I need to get into a Christmas giving mood before I make a second pass through those papers since many students need a boost in my Media Writing module. I don't like passing third level students in my writing class unless they have the potential to write for hire. That's a real standard, based on my underlying belief that all students should have commercial skills that enable them to pay for my pension. If they cannot write a script, provide written treatment for a shoot or analyse a topic through effective critical writing, then I've failed if they fail. I'm wrapped up in a little frustration because academic failures have a cause and it's often easy to pin blame at the facilitator (i.e., the lecturer who set the exercises and delivered the education). So part of my pre-Christmas challenge is to give myself the gift of a tactic that might help the next cohort of students get through this module without the pain of failure. That next group is special because they're unemployed members of the Dell Redundant Workers' Association. Time to get cracking and rediscover the giving spirit.

YOU LEARN A LOT from ultrasounds including a lot of precious things. We've known since September that new cries might be filling the house next June but when you see the outline of an embryonic form, everything comes into sharper focus. We're sharing an ultrasound scan taken just after 12 weeks of growth and even though this is our second time around, it's just as precious as seeing little Mia when she was this young. Pregnancies are special times and we know how important it is to let things settle. Our home is a lot more toddler-friendly now than three years ago when Mia arrived and there are certainly more toys to occupy time. We don't care if pink isn't the favourite colour of the next baby and we're just going to wait for a surprise on the 10th of June 2011 when the real fun starts.

Fact: The little one will be hit with a tax obligation of at least EUR 20,000 on birth. 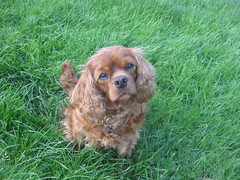 WE HAVE A HISTORY of rehoming Irish animals and little Mia goes out of her way to pet the neighbour's King Charles Spaniel. So when the face of Trixie scroll up on my Irish Animals Alerts for County Tipperary, I had to snap and share her here. Trixie is a beautiful five-year-old King Charles. Her bio says, "She is a great dog. She is sweet and friendly and affectionate. Trixie is great with kids. She will make a great family pet. She is also house trained. Trxie is looking for a great home where she will get all the love and attention she deserves. She would be a great pet for any family. Trixie has a heart murmur, but she is doing fine on medication for it. This medication will cost 25-30 euro per month. She would love a nice secure garden where she can play. She also loves her walkies." Pauline has details on +353 87 917 2474 and if you ring, you'll discover that the Rescue prefers to rehome their animals in places where the dog will have some company during the day.

Notes on Flying through Volcanic Ash 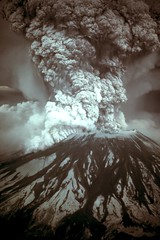 ON THE 20TH of May 1980, I was sitting in the right seat of a C-141 in Utah with a crew about to finish our fourth sortie carrying Minuteman missiles between Utah and Montana. These sorties used max takeoff power from the C-141 Starlifter because the ICBM missiles weighed nearly 70,000 pounds and filled the entire cargo compartment. But after the last run, we knew we could depend on the gas-guzzling Pratt & Whitney TF33P7 engines. They pushed out 20,000 pounds of thrust each and they were highly reliable. So when we wrapped up the work in Utah, we departed Hill AFB with an empty load and rocketed to FL350 for a short trip into California. The route took us due west then across the Donner Pass into Travis AFB. I still remember the uneasy feeling I got when Hal the aircraft commander throttled back at level off because the number four engine burped and shot a 10-foot plume of flame out its front compressor. The whole aircraft shuddered and our main air conditioning pack started a wild temperature fluctuation. We discovered later that we were approaching the leading edge of the Mount St Helen's volcanic ash cloud and that the cloud extended higher than several weather experts had predicted. Since we were nearly directly overhead a military operating area, we told Air Traffic Control we were descending immediately and returning to our departure base. A half hour later we were back on the ground. We spent three days in Utah waiting for a ride back to California. Two of the aircraft's engines had to be repaired at a cost of $109,000 each. I filed away a "note to self" about flying downwind of volcanoes when I saw the final incident report and cost of our 43-minute flight. It's more dangerous than flying into blowing sand. Today, most of Europe is closed to flight because of a large volcanic ash cloud extending from Iceland to the south of France. Aircraft engines represent nearly 35% of the value of a new commercial airplane. As I discovered, those well-tuned pieces of machinery don't like sucking ash instead of air.

There is volcanic ash on my car. (The Qik clip proves it.)

When I Was Deciding to Go to University 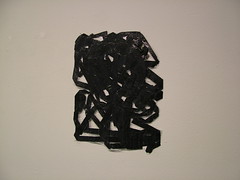 I REMEMBER VIVIDLY making a decision that I was going to head west from Pennsylvania to attend college in Colorado. I know where I was because I bit my lip on a bone-jarring bus ride to a track meet in Lancaster County, Pennsylvania. Back in the early 70s, the world was doing alright without AltaVista, Yahoo! or Google. Life seemed simpler, even with the innuendos that were part of the backstage action during "West Side Story," a play that my high school was doing. The school play was a big deal and so was going out to the movies--you had to because you couldn't rent DVDs or VHS tapes. They didn't exist--but I had several hundred yards of eight-track cassette tapes to rewind every weekend. My youngest brother would pull the tape out of the cassettes and extend the mess all over the living room. So I sat in front of a black and white television and rewound tapes. Most of the time, the TV had snowy reception, so I read the newspaper. I think about all these things because when I was deciding on a third level education, I made my decision in a totally analogue way. No YouTube, no digital downloads, no websites. Just a little brochure that I read when on the bus headed to track meets.


Continue reading "When I Was Deciding to Go to University" »

IF LIFE IS A 12 act play, I have just started Act Nine. In this act, my script says I should make, deliver, share and save. I'm inspired by the memory of my late father who entered hospice care seven years ago this week. When we returned for his funeral, the hometown greeted us with a blanket of 12 inches of snow. Dad used to make things with his hands and place those things into the homes and gardens of others. Because of his creativity, hundreds of people enjoyed special settings under decorative canvas tents or with floral arrangements that provided accent points at dinner parties, receptions and special events. I want to become a maker too. That's going to unfold only if I stick to a schedule, produce things and burrow through a mass of papers and unread book. Time to get started on Act Nine. Sent mail2blog using Nokia E90 O2 3G service along the M1 near Dublin Airport.

Scraped from my phone 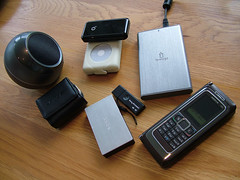 MY POOR NOKIA E90 is overflowing with notes to self. Here's hoping that I can get some traction by shifting them over to an action area of my blog.

-- Sit in the Vibe Bar, off Brick Lane, to discuss the future.

-- Twitter is much less muscular than a true microblog because you cannot thread.

-- Caravans are fun venues when they're on top of hotels.

-- One million 3G iPhones were sold in three days.

-- In 2008, the shiny people at social networking events were quick to slag off video as a conversation tool.

-- "Everybody and his brother is doing a mobile app nowadays."